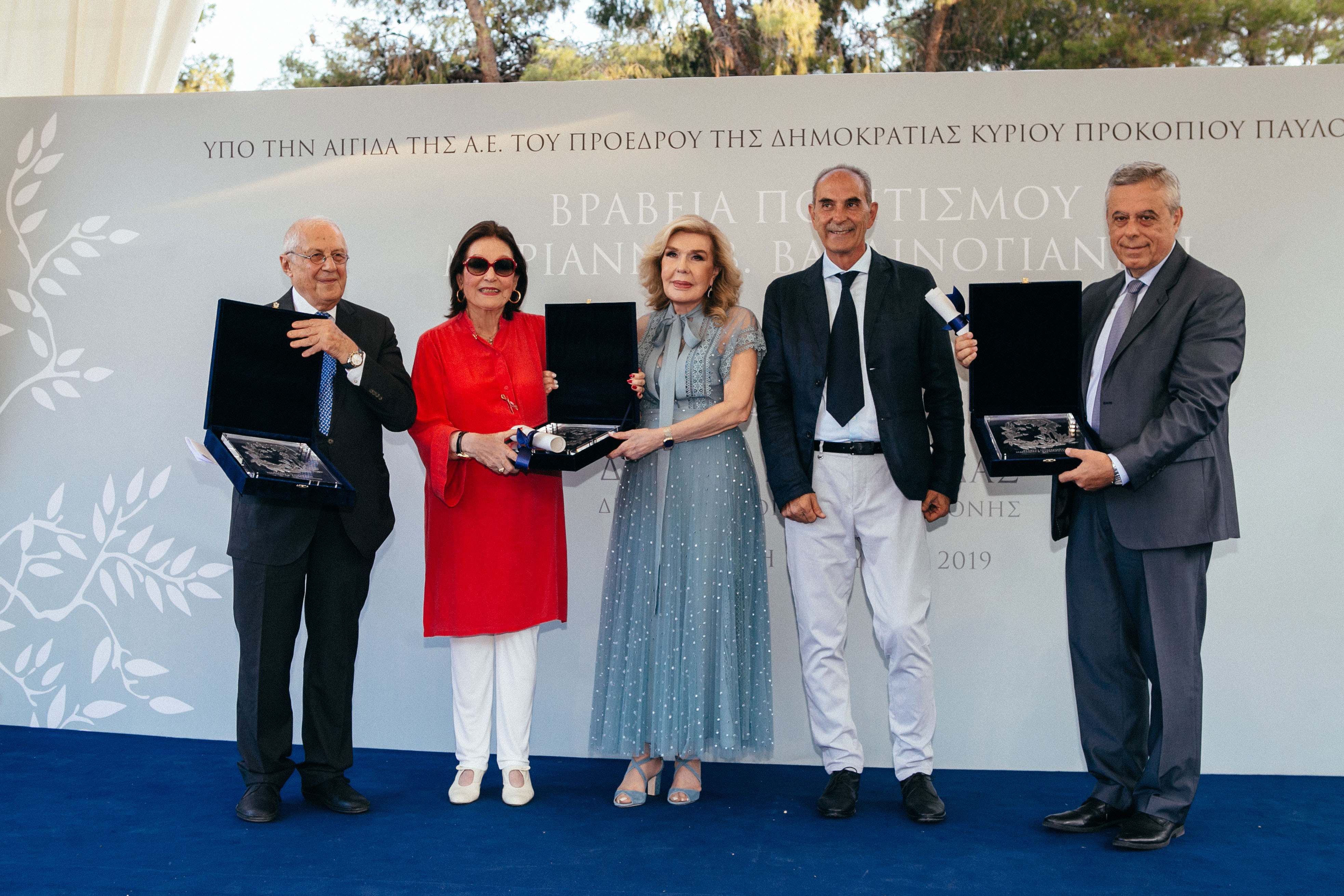 With a modest and symbolic ceremony, under the auspices of the President of the Hellenic Republic, Prokopios Pavlopoulos, the second “Marianna V. Vardinoyannis Culture Awards” ceremony was held in the Town Hall of Ermioni, on Friday 19 July 2019.

The Municipality of Ermioni, as a recognition for the significant  contribution of the UNESCO Goodwill Ambassador, Mrs Marianna V. Vardinoyannis, both for Culture and for Humanity, organised the Culture Awards for the second consecutive year, an annual institution to honour people or agencies that contribute with their activity in the promotion of Culture at national or local level.

The “Marianna V. Vardinoyannis Culture Awards” for 2019 were awarded to the Professor Emeritus of Classical Archaeology of the University of Thessaloniki and President of the Acropolis Museum, Dimitrios Pantermalis, for his contribution to the promotion of our cultural heritage and his campaign for the return of the Parthenon Sculptures, to the Greek language teacher of Ermioni, Giannis Isaias, for his contribution to the promotion of the history, traditions and Culture of Ermioni and to Nana Mouskouri, the star of international fame, for her contribution to the Arts globally.

The awards were given out by the Mayor of Ermionis, Dimitrios Sfyris, and the President of the Jury for the Marianna V. Vardinoyannis Awards.

Unfortunately Mr. Prokopios Pavlopoulos, the President of the Hellenic Republic, was unable to attend as scheduled, due to the earthquake in Athens, but he requested that his speech was read out in honour of the award winners, but also in order to send, through the Culture Awards, a strong message about the need for the return of the Parthenon Sculptures:

“We keep fighting this culturally sacred Fight uninterruptedly. This Fight is inextricably linked to the satisfaction of a completely justified request, which we all must serve, regardless of nationality, given that it essentially pertains to a request on the part of Humanity, since it has to do with the core of its Cultural Heritage. First and foremost, it has been globally admitted that these Sculptures belong both ethically and culturally, to the Parthenon and its Monuments.  And this is because without these Sculptures, the Parthenon, heavily injured from a sacrilegious act of vandalism and pillage, covered for more than two centuries by the cloak of a so-called “archeolatry”, which directly harms the World’s Cultural Heritage, cannot symbolise, and therefore, emit to Humanity the eternal, perennial and unique cultural message that befits it”, stated the President of the Hellenic Republic, among other things.

Mr. Dimitrios Syris, Mayor of Ermioni, referring to the Culture Awards, spoke about a significant institution which is a “milestone in the history of Ermioni”, and he further personally thanked Mrs Marianna V. Vardinoyannis and her husband, Mr Vardis I. Vardinoyannis, for everything they have done for Ermioni, calling them the “last great benefactors”.

The President of the Awards Jury, Mrs Marianna V. Vardinoyannis, congratulated all the winners, and full of emotion spoke about her birth place, Ermioni, and the importance of culture in shaping a better society:  “My emotion is so great I cannot hide it, that this institution of the Culture Awards has now been established and is being held for the second year in the Municipality of Ermioni. I am particularly happy that once again we can hear the heart of culture beating here, because I always believed that only through history, culture and art can we dream of a better world. Three prominent people of culture are here with us today, so we can honour them and express our gratitude, not only about their inspiring work, but also because they pass on to the next generations, each one in their own way and unique personality, the values of culture. And this continuity is of the greatest value in my view”, Mrs Vardinoyannis stated.

When accepting the “Marianna V. Vardinoyannis Culture Award”, Mr Pantermalis spoke about a great honour, and in his speech made extensive reference to the history of Ermioni, presenting historical facts about the place: “This land hides many things, much archaeological hope, and I am very happy to be here today.  I would like to thank the Municipality of Ermioni and Marianna V. Vardinoyannis, personally, who is a special kind of champion of social contribution and culture”, Mr. Pantermalis noted among other things.

The Greek language teacher, Giannis Isaias, who was honoured for his contribution to the Culture of Argolida, thanked the Municipality and the Jury, and talked about the importance one always endeavouring for the best.

Especially touching was the award of the “Cultural Award for contribution to the Arts internationally” to Nana Mouskouri.  The international performer spoke about her life, noting that many of the things she was never taught in school, she learned from the works of all the creators that trusted her with their songs.

Nana Mouskouri spoke about the deep and long friendship she has with Marianna V. Vardinoyannis, to whom she delivered the honorary distinction she received during a special event in Strasbourg, together with an amount for the support of the children of ELPIDA.

A very special moment was of the award of the scholarships by the “Marianna V. Vardinoyannis” Foundation to three girls from Argolida, who were admitted with the highest scores to the History and Archaeology Department of the National and Kapodistrian University of Athens.

The event was moderated by the journalist Eirini Nikolopoulou. 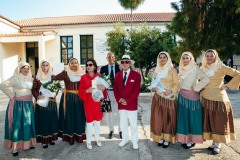 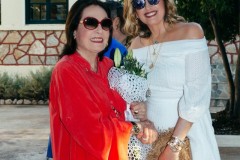 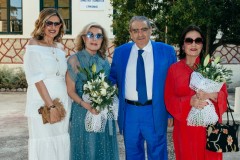 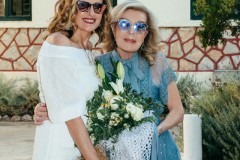 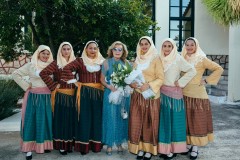 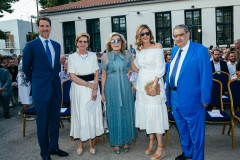 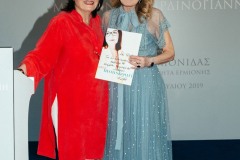 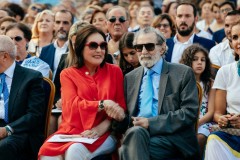 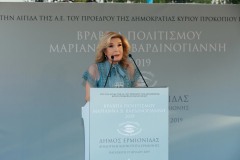 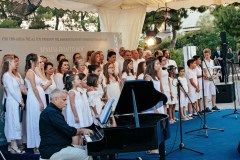 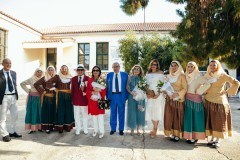 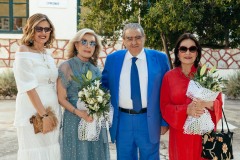 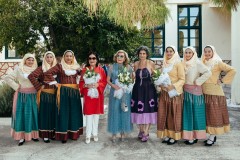 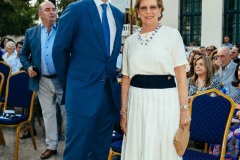 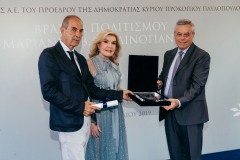 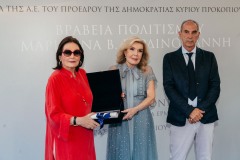 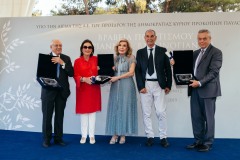 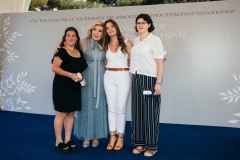 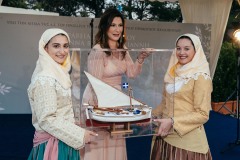 INTERACTIVE STUDENT PRESENTATION IN THE CONTEXT OF THE “SPEAK TRUTH TO POWER” PROGRAMME
October 9, 2019

MARIANNA V. VARDINOYANNIS, KERRY AND TED KENNEDY MEET WITH THE PRESIDENT OF THE HELLENIC REPUBLIC
October 8, 2019