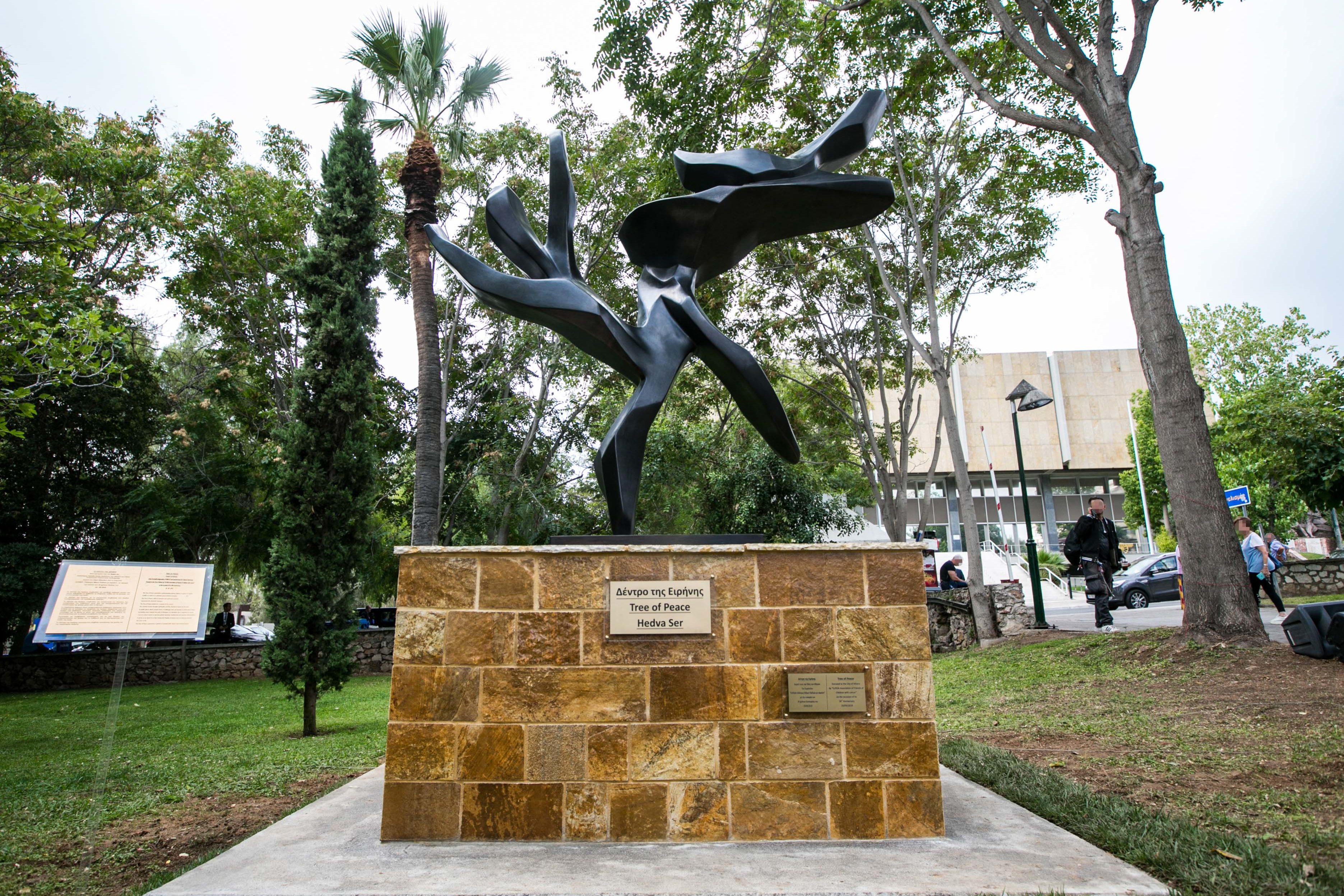 On the occasion of International Day of Peace, which is observed on 21st September, Mr Prokopios Pavlopoulos, President of the Hellenic Republic, Mr Kostas Bakoyannis, Mayor of Athens, and Marianna V. Vardinoyannis, UNESCO’s Goodwill Ambassador, all took part in the unveiling of the “Tree of Peace” sculpture at Rizari park on Friday, 20 September 2019.

This sculpture was a gift offered to the city of Athens by the “ELPIDA Association Friends of Children with Cancer” on the 30th anniversary of its founding. The installation of the “Tree of Peace” was realised with the support of “Athens Culture Net”, the city of Athens cultural network.

Also present was the creator of this work of art, Hedva Ser, UNESCO Special Envoy for Cultural Diplomacy.

“It is my great pleasure and honour to be at the unveiling of the “Tree of Peace” which “ELPIDA” and Marianna V. Vardinoyannis offered to the city of Athens.  Marianna, once more we thank you for your contribution and sensitivity, but above all, we thank you for the symbolism that is conveyed by your work.  Because it is not only important to give – of equal importance is the footprint that is left behind from this contribution.  The “Tree of Peace” has found its place in this city, in this land, which historically gave meaning to the definition of peace.  With this sculpture, Hedva Ser also leaves her mark in this city and we warm-heartedly thank her, said the President of the Hellenic Republic at the unveiling celebration.

Kostas Bakoyannis, Mayor of the City of Athens, pointed out that: “After 10 difficult years for Greece, we have a great need for this work of art.  The work of art reminds us of the need for “togetherness”.  We are truly grateful to the “ELPIDA” family, not only for offering this work of art, but for everything they have done.  I hope that the work done by “ELPIDA” inspires others to follow this path”.

Mrs. Vardinoyannis, who was particularly moved, spoke about the sculpture’s symbolism: “Here in the City of Athens, 30 years ago, our Association planted a small branch of hope. Hope for our country’s children who suffer from cancer and for their families.  Today, this branch has been transformed into a large tree which bore fruit and gave life to thousands of children both from Greece and abroad, having built bridges of friendship and collaboration between nations with health as a vehicle.  With great honour and emotion, and on the occasion of its 30th anniversary and tomorrow’s International Day of Peace, the ELPIDA Association offers a symbolic gift to Athenians and all the Greek people who embraced our cause, as a huge “thank you”.  This unique work of art, which speaks many languages – the “Tree of Peace” by Hedva Ser, renowned sculptor and UNESCO Special Envoy for Cultural Diplomacy – from today becomes the symbol of ELPIDA for a world of peace and brotherhood, a world of love for children, dialogue and collaboration between nations. Ideals that were born in Athens and remain an integral part of our country’s identity.”

The creator of the work of art stated: “Given that our world is becoming more and more complex, we need to step back and enhance some values so that we can communicate better, respect one another, respect history, the hopes and dreams of the person next to us.  As an artist, I use my art to achieve this.  My philosophy is that art is a tool for achieving peace.  My incentive was always to attempt to make a better world, and my sculpture is a true symbolisation of this: The effort to create a better world”.

Mrs. Vardinoyannis and Mrs. Ser also announced that, under the auspices of UNESCO, they intend to launch a joint effort for the creation of the “Road to Peace” throughout the world.

The unveiling was followed by a dinner at the Armed Forces Officers Club which was attended by politicians, academics, diplomats and journalists.  The dinner was attended by Mr. Prokopios Pavlopoulos, President of the Hellenic Republic, and his wife Sissy Pavlopoulou; Vasilis Kikilias, Minister of Health; Bishop of Thespian Symeon, representing the Archbishop of Athens and All Greece Hieronymus; General Christos Christodoulou, Chief of the Hellenic National Defence General Staff; Panagiotis Pikrammenos, Deputy Prime Minister of Greece; Commissioner Dimitris Avramopoulos; Giorgos I. Vardinogiannis, Nana Mouskouri, the PMs Olga Kefalogianni, Thanos Plevris, Konstantinos Bogdanos, and Liana Kanelli; the MEP Manolis Kefalogiannis and members of the BoDs of the Associations ELPIDA and ORAMA ELPIDAS.

The “Hymn of the Tree of Peace”, composed by Pierre Sebaoun and sung by world famous Greek soprano Anastasia Zanni, was performed at the dinner.  The event was moderated by the journalist Irene Nikolopoulou.

It is worth noting that the “Tree of Peace” sculpture adorns central locations in many cities of the world. Specifically, it has been erected at universities and public areas in: Berlin, Strasbourg, Boston, Philadelphia, Arizona, Jerusalem, Palestine, Malta, Andorra, Baku.

The “Tree of Peace” is a global symbol of understanding between nations for the resolution of conflicts and is one of UNESCO’s symbols, which in miniature form is offered to high-ranking individuals from the field of politics, culture and peace throughout the world.

Inspired by nature’s miracles, Hedva Ser created the bronze sculpture that stretches its branches into the sky, as if pleading for mutual understanding and peace. 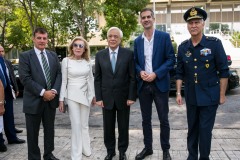 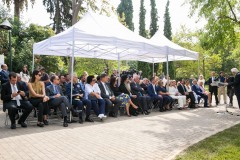 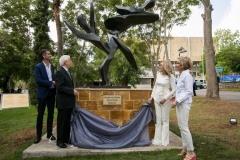 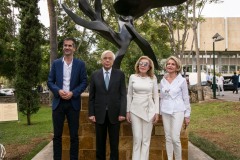 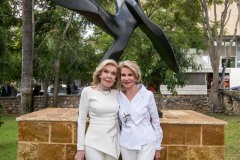 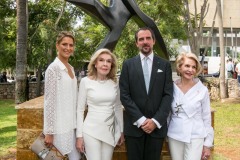 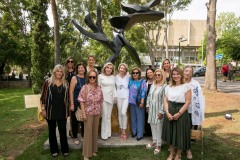 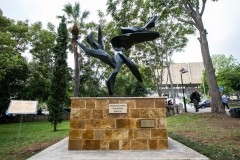 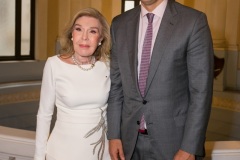 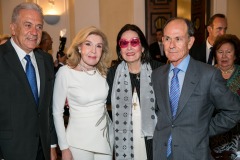 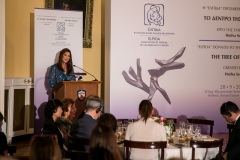 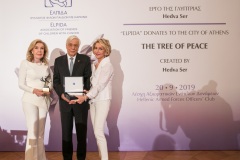 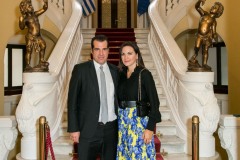 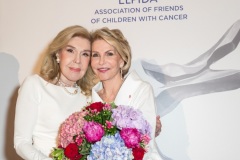 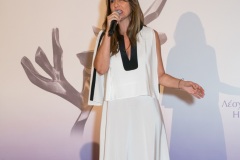 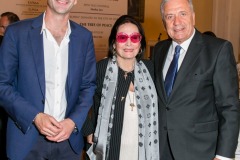 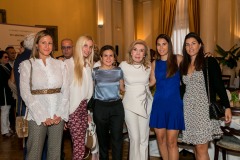 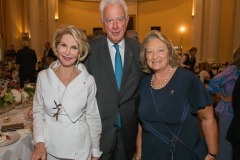